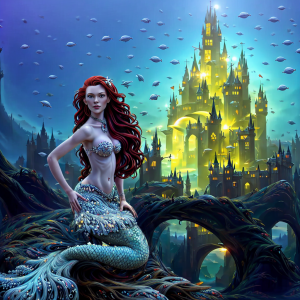 I’ve lived in Jellyfish Reef all of my life. It was a beautiful underground coral city in the Levurian Kingdom. Born and raised under the sea, I grew my fins here, went to school here, had my first heartbreak here, and I was destined to rule and die here. It was my job to follow in my father’s footsteps and rule Levurian.

If I could have my way, I’d leave this place, but I was a mermaid princess, and that meant what I wanted didn’t matter. All that mattered was the Kingdom. It was my birthright, and as fucked up as that felt sometimes, I knew I had an obligation to my people.

And my dad, King Triton, loved the merpeople of Levurian Kingdom more than he loved anything (except well… himself). There was only one other civilization of our race to exist in these waters: the Caspian Clan. They had once been a part of our kingdom, but that was many, many moons ago.
After disagreements regarding how we interact with the human world, they branched off to start their own group and the two kingdoms had been at war with one another for over 300 years. The only semblance of peace between us was a truce for the common goal of protecting our people from humans.

The legend said that one day Atargatis would return to the sea, and when she did, she would unite the two kingdoms once more, and bless us with strength, fertility, and peace.
I was too old to believe in fairy tales anymore, but I wished more than anything for this to be true. One of my closest friends was from the Caspian Clan.

Her name was Nami. She was loud and wild, with pink hair and pouty lips, and a magenta tail to match. She reminded me of bubble gum I’d had once from the human world. She was sweet and addicting, and so much fun to be around.

If it sounds like I have a crush on her, that’s because I do…

And I probably would have made a move were it not for the fact that Nami already had a girlfriend, her mate Kishi. When mermaids mate, we mate for life. It was the way we had always been.