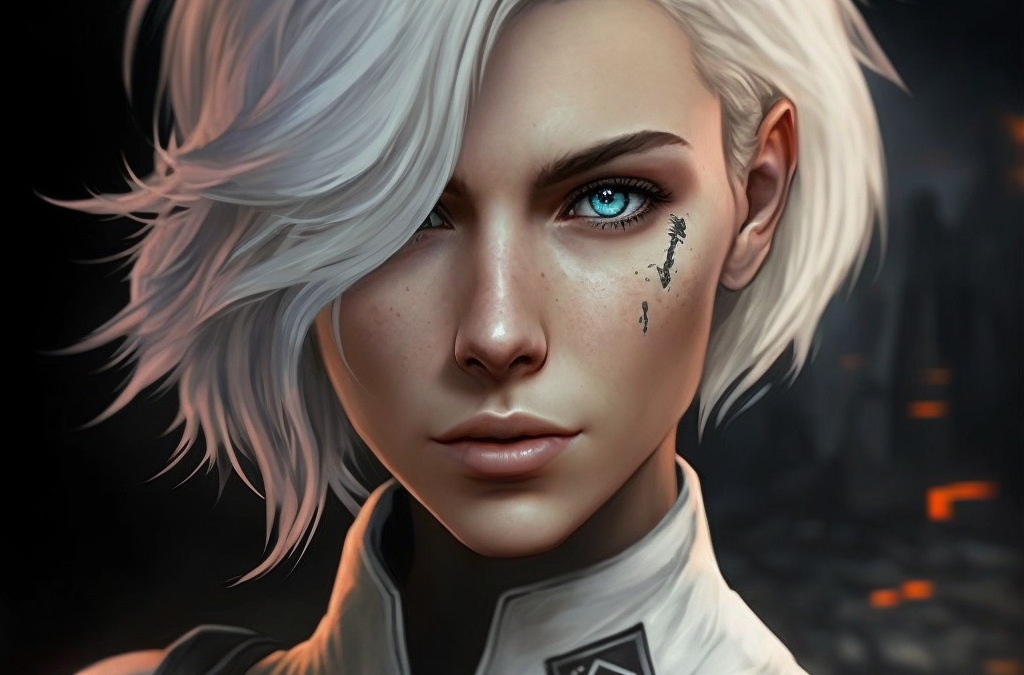 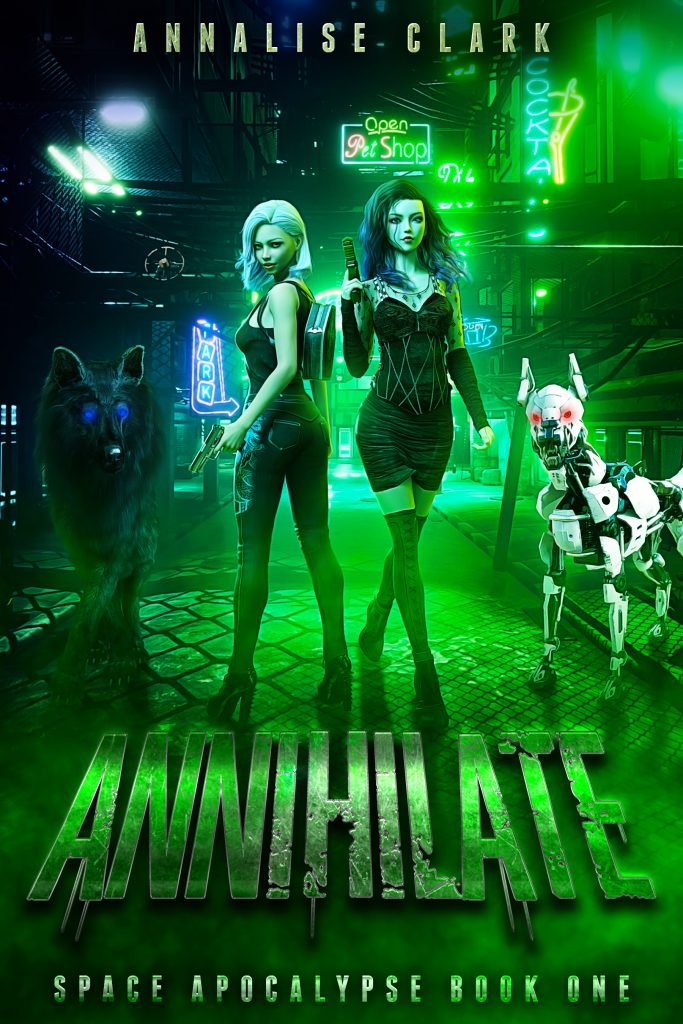 The whole galaxy’s gone to shit and in this dog-eat-dog world, you do what you must to stay alive.

That’s how the two of us became partners. The only female bounty hunters left in space, and the best in the business, we came highly recommended and high on the hit list of every thief, pirate, and vagabond up to no good on this side of the galaxy.

Hunting down the Galaxy’s Most Wanted kept food in our bellies and our ship in the skies. But all that time on the run, chasing the bad guys to make ends meet can get lonely. So, when a new species moved onto the planet we now call home and try to take over the remaining human survivors, we fight back.

As for how we became lovers… well, that’s another story. But if you’d like to hear it, take a seat and make yourself at home.

“Safari, get over here!” Kavita called to me from the front of the ship where she had been navigating us toward the Tiberius Terminal for our next assignment.

Her robot dog, Memory, followed at my heels as I made my way to the cockpit. His eyes flickered and his voice warbled, as it always did when he was calculating something. That little guy and his brilliant computer mind had saved our asses on more than one occasion.

“Good boy,” I whispered, stepping through the threshold and into the pilot area of our little ship. She was a bit worse for wear after our last job, but she got us where we needed to go. And we’d just dumped most of our savings into building a new house on Logara and staking down roots for the first time since shit hit the fan after the war, so we’d need to complete this job to do some repairs on the ship before taking another.

If things settled down, we had dreams of watching the two suns rise over a mug of hot coffee on the patio like the good old days when humans lived on Earth. But this job… well, there would always be a need for bounty hunters.

No matter how good things got in the galaxy, someone would always be looking to shake things down or take what they didn’t earn. And as long as there were bastards out there thieving and destroying what wasn’t theirs, you’d find bounty hunters like us chasing them down and dragging them back to justice.

That’s not to say I’m on the side of the government either if you want to call them that. No, our leadership since the war had been questionable, at best. But at least there was some sort of governing happening.

Goddess knows, the people can’t govern themselves! They’d all but proven that in the last decade of lawlessness. After the Red Sun Order had attacked the galaxy and entire planets were blown to smithereens or burned in the wake, we’d had to rebuild where we could and how we could.

I was only 21 years old when it started, but I’ve been on my own a lot longer than that. Unlike many who lost their families in the war, I lost mine long before that.  My home planet? Well, that I did lose in the war, but I’d been desperately trying to get off that rock since I was a teen, so I suppose it was just as well.

Neither Kavina nor I had started on Logara. In fact, we’d not even known this little blue planet with the golden suns existed until we came here a few months ago on a mission. We were on the tail of infamous space pirate Harley ‘The Sparrow’ Swien when one of our informants tipped us off that The Sparrow had been spotted on a small planet inhabited by human survivors of the war.

We snatched his ass up and hauled him in to collect our bounty but vowed to come back to Logara and have a better look around. Three days later, we decided that after years of exploring one end of this galaxy to the other, Logara was as close to home as any place we’d seen so far. Pooling our money, we purchased a plot just outside the main city limits, and construction of our home was set to be complete in two months.

It was exciting, if not a little scary, too. I’d never been the settling down type. Meeting Kavina had changed a lot of things about me. And although I wasn’t ready to give up the bounty hunter life completely, I was excited about our new home on Logara.

Things moved a bit slower on Logara, but that was part of its charm for us. Whipping our little beat-up ship from planet to planet, hunting the worst scum of the galaxy was profitable but exhausting work. If we had a quiet little place to call home, we might even take a vacation now and then.

I was pulled out of my thoughts by what she had called me to the front of the ship to see.

“What the hell is that?” I muttered, staring out the front glass toward the Amazone Station. The space station where we were to land was covered in large, mechanical spiders that seemed to be breaking down the docking areas.

“Fuck if I know but it doesn’t look good.” As our ship hovered in space, pausing its trajectory toward the destination, we watched the white and grey spiders violently rip pieces of the docking station apart. Debris floated out into the darkness, but we weren’t yet close enough to better assess the situation.

And I didn’t intend to get any closer.

Neither of us had seen mecha like this since the war. We’d thought they’d all been destroyed after the Red Sun Order was stripped of their power. There were plenty of robots around – hell, some planets were completely inhabited by them, but none of them were quite like these. There had always been something a bit more intense about these.

“Plan B?” she asked, glancing my way, and redirecting our flight path. She always knew what I was thinking before I said it out loud, which was part of what made us such good partners.

“Aether Base?” I guessed, and Kavita nodded her agreement. The Aether Base was neutral territory, and it was close enough that we could make it on what little fuel we had left in the ship’s tanks. We could refuel there and try to figure out what the fuck was happening at Tiberius Terminal.

If there was anything I had learned after ten years of bounty hunting and flying ships, it was that you never went in blind and that situations can always change without warning. Whatever those spiders were doing, and whoever had sent them, we weren’t going to fly into a hot mess without knowing the facts.

And so, we charted a path to our Plan B, and with Kavina flying manual in the cockpit, I went back to assess our inventory. We’d been running low on food and supplies on the way here, too, and I had a connection at Aether who might be able to hook us up. Supplies were scarce, but he owed me a favor, and this might be the perfect time to collect.

Toward the back of the ship in our sleeping quarters, my wolf Zion lay resting on one of the cots. I patted the gentle giant on the head as I passed by. Despite his current display of docile nature, this black beast was a killer. He was also my longest and oldest friend.

Zion had been with me since I was a little girl. An orphan, born on planet Tecephus, the bastard daughter of a poor migrant mother who was murdered by space looters years before the whole planet would be destroyed in the war. He was the only thing I had left from my old life, my home planet, or of my mother.

He had been just a pup back then when they sent me off to an orphanage I would quickly escape from when they told me I couldn’t keep Zion. In the first few years after I lose my mother, I felt deep loneliness. Sometimes, it threatened to take me over completely. In time, and with Zion’s companionship, I had learned to accept my fate in life.

For years, I believed I was destined to be alone. I was strong and independent, and I wore it like a badge, determined to prove I didn’t need or want anyone else. Refusing to wallow in my misfortune in life, I used it to propel me ahead through all of life’s challenges. With Zion at my side, I knew I could achieve anything I set my stubborn mind on.

Running from the orphanage meant I had to lay low – at least until I was of legal age, and no one would try to force me into the enslavement they called the foster care system. The first big decision I ever made on my own was to leave my home planet.

Everyone on Tecephus knew me. They knew what had happened to my mother. And they seemed hell-bent on reminding me constantly. When I ran away with Zion, I’d heard how they tsked when they spoke of me, how their noses turned up in the air, how they narrowed their eyes. They’d called my mother “trash” and thought me just the same.

I’d never much cared what anyone thought of me or said about me, however.  To get away from Tecephus where everyone would keep trying to toss me back into protective care, I hitched a ride on a cargo ship. Zion was still small enough that I could stuff him into a backpack. Taking the very few things I owned along with us, I crawled into the back of the ship when the pilot was having a few too many beers at a local pub.

He must have still been buzzed the next morning when he took off because he never even noticed me in the back. There was a small porthole window in the back and as he took to the air and my home planet became smaller and smaller beneath us, I fell in love with the freedom of space for the very first time.

Since, then Zion and I had seen so many planets, met so many different races, and experienced all kinds of new and exciting things.

It had been just me and him in this big, wide universe. That is until I met Kavita…

Get Annihilate on Amazon (Also on Kindle Unlimited)